Coaching & Mentoring: Sometimes It's About The Pebbles

I've had the very cool, very humbling opportunities of mentoring and coaching other IT folks over the last two years or so. The topics are varied but mostly I try to encourage the people I've spoken with or understand what they are struggling with and see if we can solution something out between the two of us. It's been pretty exciting for me to give back to the IT community in this way.

When I was starting in IT, I had a lot of coaches, managers, and mentors who did various things to encourage me and help me deal with some tough situations. Working as a woman in tech can get very discouraging at times and many folks were there to help me through situations and roadblocks which might have resulted in me quitting IT all together. Without mentors and coaches, many of us wouldn't be were we are today.

I was recently discussing with a mentee some difficulties they were having trying to find a way to be valuable on a team. There were large problems that we both identified which should be addressed for some major roadblocks to be resolved. However, we also identified that neither one of us was in a really good position to resolve those roadblocks and issues which caused us to feel like we weren't doing our best testing.

While there were many examples of issues which I could list here, I don't feel like those issues are important to the story. What is important; what we resolved in our discussion that day was to find ways we could gather pebbles and make those pebbles count.

What I Mean By Pebbles

We all see the glaring, huge problems day in and day out. However, many of us are not in the position to affect those problems and make sweeping changes. What we can do, what we are empowered to do is find small problems and fix them, or bring the problem down to our level and fix it locally.

By looking at the problem mountain and picking a pebble off of it, we are making that conscience decision to lead by example. Moving pebbles can eventually cause avalanches and bring down mountains of problems. Moving pebbles can eventually have a chain reaction on a larger mountain of problems. It's an easier approach than trying to deal with a whole mountain of a problems at once which can seem pretty futile.

While I mentioned earlier that I wasn't going to list the issues, I feel like this particular one is common enough in IT and an excellent example of how a problem can be reduced to a pebble and that pebble can effect change on a larger scale.

However, I brought the problem down to my level. What could I do to change the visibility of testing for developers and stakeholders I interact with? I started adding all my notes, screen shots, and workflow videos to the stories on the storyboard. By doing this, I created visibility for my team, and for stakeholders, and the larger organization. It's a simple thing. It's something I generally do anyway and it cost me very little effort.

Since I started adding this information to the stories, I've had comments from team members, feedback from other teams, and stakeholders about how valuable the information is to them and what they plan on doing with it.

This display of visibility is infectious. It filters out into the different groups I'm involved with and then is held up as an example of what people could do. This is the chain reaction I'm seeking. This is the start of what could eventually be a tipping point which turns into the avalanche which allows a larger change to happen.

The mountain is right there! It's huge! Why doesn't anyone see it? Well, sometimes people get used to the mountain being there and they don't see it as a problem anymore. They see it as part of the scenery that they have to bypass or work-around to accomplish what they need to do. While it could be applauded that many have found ways to work around issues, allowing issues like this to continue is detrimental to a larger organization eventually.

There is a fine line between creating a work-around to an issue, fixing it for your team by setting an example, or adding to the problem. The thing is, you never know which one it is until you try something.

Pebbles are ways of finding that small scale experiment and putting it to work, displaying it, and getting feedback. If something isn't working on a small scale, it won't work to solve the problem on a larger one. If your experiment works, but it's not creating enough momentum, you'll have to decide if it's worth continuing, or if you need to broadcast your results to a wider audience, aka - presentations, lighting talks, blogging, v-logging.

Collect your pebbles. Show them to as many people as you can. You never know when those pebbles will move mountains. 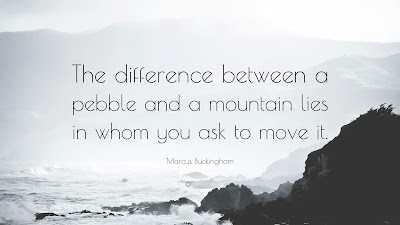 September 01, 2017
"I handed my passport to the immigration officer, and he looked at it and looked at me and said, 'What are you?'" - Grace Hopper (60 Minutes Interview)

The Grace Hopper quote above always makes me think about my job as a tester. Companies that develop software know they need testers, but they generally have hard time figuring out what testers are and what skills they need in the role. There have many discussions about how testers can be more technical and at some point, coding comes up in the conversation. My response on twitter contained a few things on a list I have, which I created for a client, so they could have a checklist of skills. This checklist was a guideline to determine the skill level of the tester applicant. This is by no means a complete list and I would be open to additions to the list. Feel free to add those to the comments or tweet them to me.

April 24, 2019
"You build on failure. You use it as a stepping stone. Close the door on the past. You don't try to forget the mistakes, but you don't dwell on it. You don't let it have any of your energy, or any of your time, or any of your space."
- Johnny Cash
There are times when our work, as a team, as testers on a team can give us insight into how we can improve things for the overall success of the product. Often those things are issues or defects which can present themselves at the most inconvenient times, in the most inconsistent ways. When we can learn from them and improve things for everyone on the team, the team benefits. When the team owns the defects and the testing strategy, not only the testers, then customers benefit as well.

I was working remotely verifying a release and only had simulators and emulators to work with as I was testing mobile builds. Often folks mistrust builds which only use emulated software and not real devices for fairly good reasons. It’s usu…
Read more

Recently, I've had the chance to work on a project with some other awesome folks which has involved creating a BFF - A back end for front end service. This allows the app to access several API and aggregate calls into something the app can use, or lets the app send information to the BFF for several APIs to receive.

Part of the code coverage for the BFF was creating some simple tests with Postman around the business logic and interactions.

Learning About Postman I did lots of reading. Lots of reading how others has done things (Danny Danton - big props for being a super help!). Eventually, I came down to a small set of tests which could give us some accuracy about our BFF pipeline and the APIs we were accessing with it.

Postman has a couple of options for this, global variables, environmental variables, and plain variables. One of the first problems I came across was gathering a vari…
Read more